Madge & Louie’s was founded by two very different, yet dedicated souls, united by their passion in their search for fresh, very high quality and totally unadulterated Extra Virgin Olive Oil from Italy. 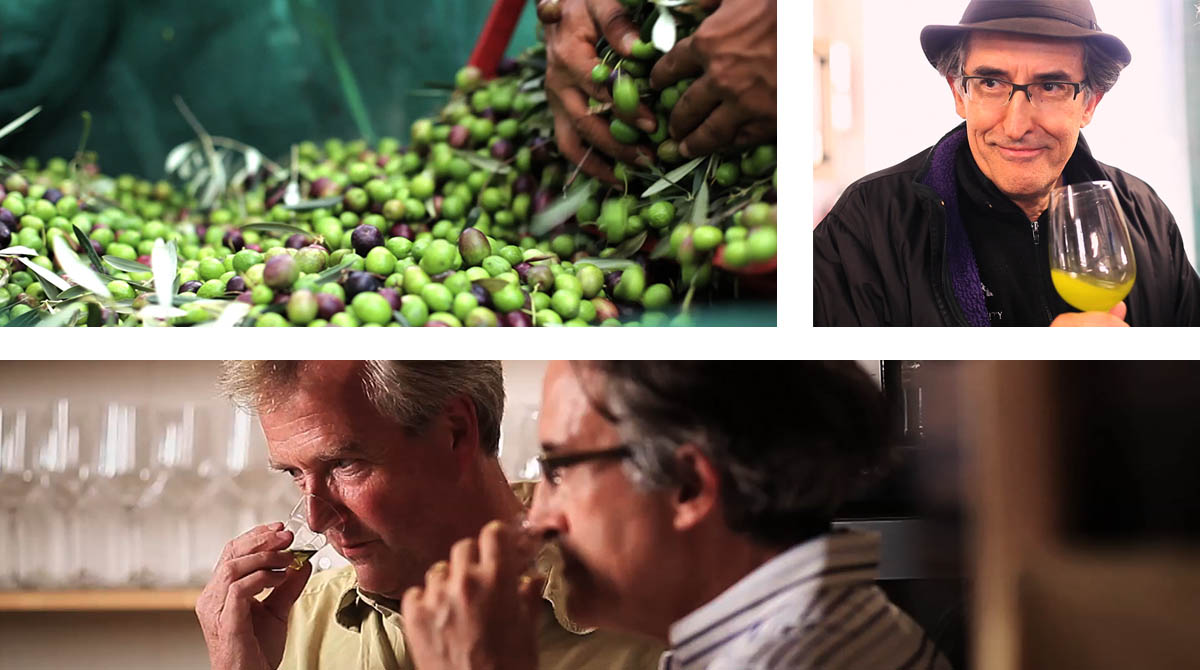 Johnny Madge, a native of the U.K. has been living in Italy for over 39 years. He originally traveled to Rome as a student of fine arts and later to Carrara to study sculpture. Soon after, Johnny discovered his interest in Extra Virgin Olive Oils. He has been living in Casperia since 1986 and has been tasting oils incessantly since 2002 when he opened his olive oil/wine bar and art gallery.

Johnny’s Olive Oil Tours, in the the words of Tom Mueller from his world famous book, “Extra Virginity”, have become “legendary”.

In 2005 Johnny was asked to be on the panel of Slow Foods’ Extravergine Olive Oil Guide, published every year in Italy. There are about 100 tasters who work for the Guide, 99 of them are Italian, and so Johnny has quite a unique position!  He also travels the world as an expert EVO taster for numerous international events and competitions, where he will also lecture on how to identify and buy quality extra virgin olive oils.

Johnny has worked with both British and U.S. television and radio promoting quality olive oil. In 2009 he started his Johnny Madge Olive Oil Tours which Tom Mueller described as legendary in his world famous book "Extra Virginity".  The tour receive excellent reviews on TripAdvisor.

Since 2014 he has been invited to judge oils in international competitions in Japan, Greece, Turkey, Britain and Italy.

Dr. R. Louis Lantelme, a health professional and dedicated to proper nutrition and healthy lifestyle choices has been in love with extra virgin olive oil ever since his early childhood. During this time, living with his Italian and French grandparents, the Mediterranean Diet heavily influenced his diet.

After meeting Johnny Madge while vacationing in Casperia, a small medieval village in the Sabine Hills northeast of Rome, the Lantelme’s were treated to a fabulous olive oil tasting at Johnny’s bar. It was there that they recognized each other’s passion for Extra Virgin Olive Oil and they have dedicated themselves to bringing Italy’s finest extra virgins to the United States.

Dr. Lantelme’s research has uncovered the truth about pure Extra Virgin Olive Oil in the Mediterranean Diet, the science is in, and this is why 100% pure extra virgin olive oil can truly be called, “the healthiest food on the planet”!

Nearly every person who has been on my Olive Oil Tour has asked me if I shipped the delicious oils they tasted with me. The answer used to be: ‘no’. But no longer: I have chosen my favourite oils and Madge & Louie’s can now bring them to your home.

What makes our oils different from many of the oils available in the US? During my visits to the US I have visited various different stores where there seem to be a great choice of oils. But when you get to taste them you realise that there are problems of rancidity and often the oils are made from olives that were not fresh at the time of milling. Our oils are all fresh, seasonal oils and this freshness is not just an idea it is something that you can smell and taste. Once you have tasted them I think you will find that you are hooked!

Why Italian? Well I live in Italy and that is my field of expertise but what is exciting about Italy is the variety of different kinds of olives which we in the business call cultivars. Italy has 638 different cultivars and over the next few years we are going to get to know many of these: literally hundreds of different scents and flavours, just as with wines, to enjoy and experiment with. You will find scents of tomato, almond, artichoke and flavours that range from soft and fruity to bitter and pungent. In some varieties there are extraordinary herbal notes and flavours of even mustard greens, arugula, raw cabbage and sometimes almost wasabi.

Once you start to put together your collection of these different oils try them out on different foods and you will be amazed at how they can transform the simplest and easiest to prepare dishes. With oils like ours in your kitchen cooking becomes a vacation.